We have had an interesting week centered around a Feline Leukemia flare up in Johnny.

How We Knew Something Was Wrong

On Saturday, June 15th, Johnny started to eat much less (about 5% of what she usually eats). Over the next few days, she would sometimes come to me for food but when I would give it to her, she would start to smell it and then turn away as if the smell of it made her feel sick.

She drank a lot of water over the weekend but then would vomit up white frothy stuff.    I also noticed on Monday that her chin was wet as if she had been drooling.

She continued to eat very little and began to have very liquid diarrhea with blood and mucous (sorry, but that is life with a Feline Leukemia (FeLV) positive cat).    This is not the first time we have seen fresh blood after she has gone to the bathroom but she had been eating fine and active and playful until Saturday so we had not felt a need for a vet appointment specifically for that.

Johnnie Larkin from Foster Mama Kittys suggested she might have a urinary tract infection (UTI) and I have noticed her licking her vulva more than usual so I thought Johnny might be onto something.

Her coat condition was also not as fluffy and soft and she was much more seeking of attention (comfort and reassurance rather than play type) than usual.  She also growled at me and bit Jamey at one point which is unusual behavior for her.

In a nutshell, Jamey lost his job on February 2nd and our car permanently bit the dust (transmission) on March 2nd of this year, so we have not been able to get a new car.  We use the local wheelchair accessible van to get to places like our medical appointment but they would not transport us to the vet with Johnny, even in a carrier.

So we had to make an appointment to have them bring Jamey to the local rental car place and rent a car in order to get Johnny to the vet.   That took a couple of days to set up.

We almost didn't make the appointment as when Jamey got to the local Enterprise rental car location, they didn't have a car for us because the one they had planned for us came back damaged.   They had to drive Jamey out to Fort Polk, about 30 miles away, to pick up another one.   While this was happening, the time for the vet appointment was getting closer and closer.

Jamey made it home with the rental car about 20 minutes before we had to leave for the vet.  At which point, Johnny (who I often tell Jamey "is too smart for my own good") somehow knew something was up even though I had purposely not taken out the cat carrier in advance.  (Sometimes I could almost swear that the cats can read my mind ...)

She promptly disappeared under the bed.   The challenge of getting her out from under the bed meant that by the time we got out to the rental car with her, we were due at the vet in five minutes.   Well the rental car was a hatchback, not even remotely close to what we had requested, and terrible for getting the wheelchairs into.

Jamey managed to get our wheelchairs in while I sat in the car with Johnny's carrier on my lap, trying to keep her calm.  Unfortunately, struggling to get both wheelchairs in took so much out of Jamey that he fell as he was using his crutches to get to the driver's side door.  Thankfully someone in the apartment complex office saw him and came out to help him get back up and onto his crutches again as there is no way I could have done so.

Needless to say, neither of us were in much better shape than Johnny by the time we got to the vet.  Jamey ended up staying in the car and I went in with Johnny.

The vet said it is uncommon for spayed female cats to get a UTI and after examining Johnny, who was running a fever and clearly not feeling well, she believed she was having another flare-up of her FeLV.    Johnny had different symptoms in January but the vet also said she was having a flare-up of her FeLV then and we just need to expect her to have these from time to time as there is no cure for it.  We just need to treat the symptoms when she has a flare-up.

Given her symptoms, I asked for her to be given fluids, steroids and antibiotics.  The vet agreed with my suggestions and did so.

I am happy to say that Johnny is back to eating again and seems more comfortable.   She did have a lot of diarrhea yesterday but I suspect that was the antibiotic.    Since we have two FeLV positive cats, I am used to having to do a lot of Clorox laundry anyway.


(Above is just a very short video of Johnny and Night having a snack, something that made us so happy to see after Johnny having almost no appetite for several days.)


The important thing is Johnny has recovered from her latest FeLV flare-up and is a comfortable happy cat again.    That makes it worth all we had to do to get her to the vet.

We are hoping it will be a long while before she has another one.

I first became aware of the story on Flatbushcats Instagram account when they published https://www.instagram.com/p/Byn-WMAhNLz/ two days ago.

After seeing their post of the sick and injured kitten hobbling up to everyone who walked by trying to find help, I had to find out more.

Sarah Zoe, a rescuer in Crown Heights, Brooklyn, NY stopped to help this kitten when everyone else just walked by.     Sarah's own description of meeting Lady is:

"Ed and I were walking home on Sunday evening when a tiny cat in horrible condition came running up to us. She was hobbling towards every person who passed her by asking for help, and who knows how long she had been doing so. When someone opened the door to any of the buildings near by she would try to go in - it was clear to us that she was dumped or had at least lived inside before since she had an old flea collar on and wanted inside so badly."

Flatbush Cats said "Lady is underweight, dehydrated, has a bloated belly, scabs on her feet and had a horrible ulcer on her nose that needed to be removed."

Sarah and Ed are handling her daily care and vet visits.  All of her vet work is being paid for by Flatbush cats.

Ladybug's story can be followed (in chronological order) at

Sarah is reporting that

Ladybug has a mucometra, fluid in her uterus caused by a calcified fetus. Poor girl! She also has nasal polyps which are causing the breathing issue. Both will be dealt with when we get her in for her spay surgery that’s happening ASAP! They will then be doing a biopsy/culture of the facial ulcer wounds and figuring out what exactly those are while she’s getting her spay surgery as well. So we’re almost there as far as answers!

this is from Sarah's update link above in case you haven't had a time to check it out yourself.

There is also a donate button on the Flatbush Cats website  https://www.flatbushcats.org/  They are a 501(c)(3) organization so all donations are tax deductible.


Please note that we are not affiliated with Flatbush Cats or Sarah and Ed.  I was just touched by the spirit of this plucky little cat who worked so hard to find help that I wanted to do what we could to spread her story and encourage people to donate to Flatbush Cats via the information above to help pay for her care.

Yet again, we are in kitten season.  The time when all of the cat rescue groups are overloaded with far too many kittens.    This is the time when smaller rescue groups such as Foster Mama Kittys which are funded 100% by donations need extra contributions to get the medical care needed for the kittens (some of which turn up in very bad shape) before they can be placed for adoption, once they are old enough.


One of the purposes of this blog is to help raise money for Foster Mama Kittys as it is a group we truly believe in because we know that not a single person associated with it receives a salary or any type of compensation for their rescue work.  In fact, every foster parent for the group ends up spending their own money to take care of the cats and kittens in their care.  The adoption fees for one cat end up going right back out to pay for the vet care for the  next cat.

To this end, we have created a new store on Teespring called Quirky Quips, as with our original store, We Love Rescue Cats, 10% of the profits of everything we sell is donated by Teespring monthly directly to Foster Mama Kittys.

On all of our other products below, there is a 10% donation made to Foster Mama Kittys by Teespring.

We are continually adding new products with the 10% donation badge to both stores so please check them out when you are looking for gifts.    Some that you might want to consider include


When you have cattitude, size doesn't matter


Do you have someone in your life who loves their coffee and chocolate and enjoys a "relaxed" lifestyle? Then this might be the perfect gift for them.


Do you believe the day doesn't start until you have your coffee, then this might be the coffee mug for you:
Coffee Now!!! Or there will be consequences!


Or is more of an "awww" cat mug the way you want to start your day?

Just remember, whatever you do

Do not speak softly, ROAR Loudly!

Special Days (for birthdays, holidays and other special days)


10% of the profits for each of our items is donated directly by Teespring to Foster Mama Kittys, a 501(c)(3) non-profit organization.


OJ is one of the thousands of kittens who has been rescued by Foster Mama Kittys over the years. He was found around 9 weeks old stuck in a garage, alone and apart from his mama. In his foster home, he not only received a bath and food but also lots of love. Dottie, the family dog, loved to mother OJ even after he was bigger than she was.  OJ ended up finding his forever home with a little boy and also a brother cat, both of whom he really loves.

When you buy any of our products, the donations go to support rescue and success stories like OJs for both Foster Mama Kittys and the rescue work that we ourselves personally do.

At the moment, this is the rescue cat who is next on our list for a vet visit: 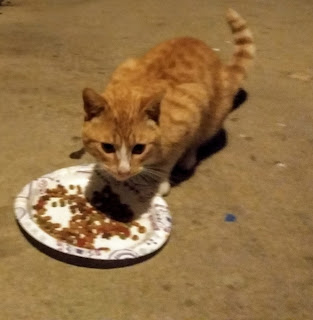 Thank you for your support of this much needed animal rescue work. 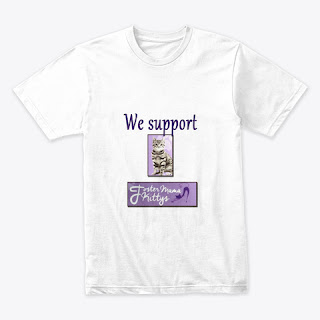